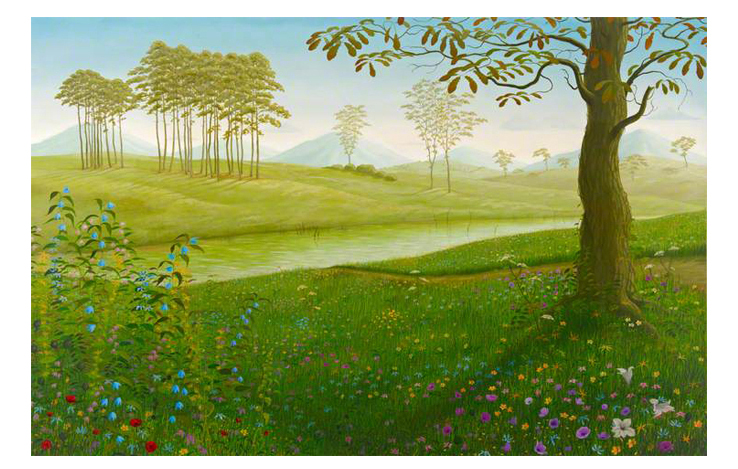 The older woman (the other artist) wrote something about a landscape. She was staying in Ticino - just over the Italian border in Switzerland, high above a lake, temperate with palm trees, flowers (bougainvillea), Italian villas along the shore, mountains in the distance.

The view from the big glass window, the balcony, is overwhelming; I feel it might consume me it's so vast. The mountains across the lake are big, I know that, but it seems if I put my hand out, I might just be able to touch them, run my hands over them, or cup their soft ridges and folds in the folds of my own hands; a paler patch of soft green, I am sure, would feel like velvet.

The younger woman says she drinks tea, eats chocolate in her studio, (sitting on the floor, perhaps). There will probably be a teacup, patterned with flowers - a bar of chocolate, laid out on its silver paper, in front of her landscape, like a picnic.

The weather is always fine; there are clouds, but no rain. Winter never comes; snow is only viewed from a distance (on a mountain top, for the view). There are leaves on the trees, always; she doesn't even know if there is a breeze. It's as if weather hasn't been arrived at yet.

The painting hangs between the wall and the baby. A long time ago, the older woman imagined a lullaby of brush-strokes painting her child to sleep, on the other side of the wall, his baby breath, rising and falling in between the swoosh of the brush, back and forth, as she primed the big canvas, stapled flat to the wall.

When he was older - still small, he would crouch over his own child - painting in the studio (wearing a Batman cape). He painted the sun (yellow on a white canvas sky), an island (a mound of brown), with a palm tree, on a blue strip of wavy sea.

Add a couple of years, and he's sitting on his bed on the other side of the wall, playing games like 'Myst' on his DS console; the rocky terrains, the vibrantly coloured landscapes, gave him a feeling that was almost impossible to describe. He loved these places; everything looked perfect - there were no people, no buildings, really. It was as if you were the first person there, as if it had all been created just for you, as if someone had laid it all out a long time ago, with everything very deliberately placed. You couldn't think of a better arrangement - it was all as perfect as could be.

'I will never make paintings like this again,' she said. 'I love cardboard,' she said.

Small works, on cardboard, were painted flat, on a kitchen table in New York. And, yes, the studio wall is first laid out on the floor, so she is in amongst it all, arranging.

Sometimes she throws pigment onto the canvas for a bit of surface and chaos.

She liked some big paintings at the Frick - by Fragonard(?) - which were painted quite carelessly, like theatrical backdrops. The duck-egg blue of a sky is her favourite colour. It's not a true sky colour, but reminds (the older woman) more of a time, a period - a place. The younger woman says -

What does she say?

She likes iridescent colours - they add movement, flatness, and something else, another quality - elusive, shimmering?

She drinks tea, lots of it, when she's in the studio, and she eats chocolate. That suggestion sticks in the older woman's mind, and on the way home, she buys a Galaxy, makes a tea and takes it upstairs to her studio.

She writes:
No mountains, just
clouds, clouds, clouds
fluffy trees, fluffy clouds
Big moon
Fire in the distance
(As if writing 'clouds' three times will fill up space on the page in a similar way to the clouds themselves, but more quickly, like shorthand).

On the way to her house, the older artist gets lost, directed over a walkway, a bridge - ugly and covered over with perspex (scratched) to keep the weather out - spanning a big highway. When she reaches the other side, she realises she's gone the wrong way, so she retraces her steps, searching for someone who can show her the way: a distinguished-looking African man, a white-haired granny pushing a baby in a pushchair, an elderly Chinese gentleman, a Cockney body-builder (gold chains) - but all are either 'Sorry, don't speak English' or, at any rate, as lost as she is. Then a Turkish minicab driver directs her back to where she had turned around, way, way before the bridge and the motorway. She feels dizzy, disorientated. There is no landmark to guide her, although a Methodist church has a familiar look to it.

Her canvases are immaculate, the corners folded neatly, at right angles to an edge (like the hospital corners the older woman learned to make in Brownies when she was little), staples at tiny intervals, even the raw edge of the canvas at the back has been turned under (and then more staples). She says an Australian she knew showed her how.

A lot of the paintings are vertical (the landscape shape, up-ended), and she says it's like when you walk up a mountain, and you think you've reached the top and can have your sandwiches, but then you've realised you have to go further, that this is only a stage up the mountain. She wants to create that feeling of... height, of 'hovering'.

She never had much truck with landscape (the older woman, that is). Once, she wrote an essay, comparing two Dutch landscapes in the National Gallery - Avenue with Trees, by who? Hobbema? And something by Ruisdael? She was young (nineteen) and didn't read anything; she just gazed at the two paintings, made some drawings, and remarked on the amount of sky - how two-thirds of the landscape was filled with sky. The ground, the land was flat, uneventful, but the sky was full of incident.

She had gone to the younger woman's exhibition, to the opening, in a little gallery behind Piccadilly, rushing past the gentlemen's clubs off St James's Square, lit up and impossibly grand-looking, to the gallery - a cube of glass and concrete. Pushing through the crowd of people, and down the stairs, there she was - standing in front of an enormous Barbie/ Bosch landscape, dressed in shimmering shades of viridian, and holding a bouquet of flowers in her arms; she looked radiant, iridescently happy.

The cardboard she loves, and the paper - there is a border - you can add things, write notes on the edges ('clouds, clouds, mountains'); things look raw, unresolved, so more open to - something.

She is looking for more contrast.

Someone said the paper had no memory. That struck her as strange - a strange but fitting description - as if the paper were a living, breathing being. Semi-opaque - the colour of skin, it did seem to have a life of its own, and the ink she drew with was literally absorbed into the paper, sinking into the surface. Unlike skin, however, the paper could be easily repaired if it was torn - the repair tissue she used stuck invisibly along uneven rips, sealing the tears like invisible plasters.

Pinned at the top two corners, the paper lifted itself away from the wall if someone walked past, as if it was breathing or sighing, and then settled itself back again.

The other side of the Studio Wall

The house is laid out the same - a mirror image of the other woman's, with the studio upstairs, at the front. Her baby sleeps in the room behind, the back room. A painting - a landscape, hangs on the studio wall, the wall that separates the studio from the baby's room.

In the baby's room, on the other side of the studio wall, on the chimneybreast, hangs a large canvas, a full-sized portrait of the younger woman, motionless and silent. The baby can look at the painting from her cot. Does she see this painting as her mother? Or does she hear the rustling of chocolate, the clink of the teaspoon on china, the scratch of charcoal on paper, the swoosh of the brush on canvas, and know that her mother is on the other side of the wall?

The baby girl is crying somewhere - at the back of the house (happy, not distressed, calling out to her father).

In her son's room, on the other side of the studio wall, the older woman had hung two portraits - ink on paper, by a friend - one of a man who looked a lot like the child's father, and the other of a woman who looked a lot like her. She'd hung the woman over his bed, and propped the man portrait against the skirting-board, so the child could see it when he woke up in the mornings (as if to make up for his father's absence).

Somewhere over the Rainbow

A rainbow in a glaze of colours. The older woman isn't sure about the fire. The younger woman says that fire is evidence of something having happened, a narrative. She says it's maybe like the moment before it all goes wrong, like it's all going to go shit at any minute (apocalypse delayed?).

Sometimes, the landscape is tinged with the hue of street lights (those orange, dinge-coloured ones). There is no winter there There are always leaves There is never snow There are no grey skies The clouds are white The sky is blue The grass is green Sometimes everything is orange There are rainbows

She wonders why there are no people. The younger woman says that people, houses, animals, would give too much away (or something like that), they would fix the landscape too much in time, and place.

Sea of No Memory

Manzanita: I am sitting on the deck outside the beach house, midday; crashing, constant ocean - a flat, foamy, blue-grey strip of sea, reaching all the way to Asia (not a little sea or channel). To the right: (up the coast) the North and Canada; to the left: California, the South.

A kite is hovering in the air now. The house next to us is a folly with a little mock lighthouse with a viewing area at the top to sit and look at the big, empty view. Catherine said this sea (Pacific to Asia) is the 'Sea of No Memory', and here I feel (and am) many thousand miles from home. I keep trying to place myself here, geographically. We are West, West on the left-hand side of the continent, and never been before. How extraordinary.

Yesterday, we walked along the beach, sand-hoppers jumping in our wake, and the noise of waves continuous - not drawing back like breath, and crashing, but rolling over and over with no draw-back, it seems. They say this coast is most like Asia, and I can see that now: mountains in watercolour distance, surrounded by low-lying mist and clouds. The beach as far as the eye can see, a mist rising in the distance, and people upright, like strokes of Chinese ink, dark against the milky background.

This morning, the flat, grey sand, wet with recent sea, tide way out, reminded me of those Sickert paintings of English seaside - a bit Norfolkish - but then to the right, it's mountains and Switzerland.