For the Love of Clothes 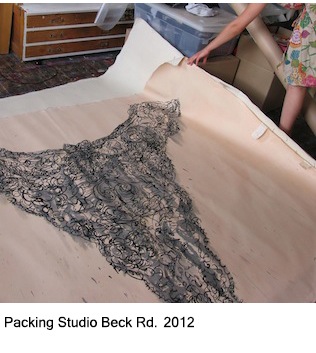 Clothes make a frequent appearance in Mikey Cuddihy's memoir A Conversation About Happiness - The story of a Lost Childhood. But here, she reveals how clothes, loss, love and sex have influenced her visual Art for over three decades.

I've always had a penchant for clothes. Even as a struggling artist, I would stretch my budget to the limit to buy something, and happily not pay the bills. Once, I returned to a shop to buy a little black dress I had tried on, but reckoned I couldn't afford, so I had run away from it at first. Sitting on the bus afterwards - the dress in its carrier bag, my thoughts ran between my son in his patched jeans, the red gas bill lying on the kitchen table, and my own reckless desire for the dress. I pictured myself wearing the dress - transformed: hair shiny, lips freshly painted with Dior 'Holiday Red.'

And then I was suddenly struck by an image of my mother, who had died in a car accident when I was nine years old - wearing her favourite black dress from Sax Fifth Avenue, 3/4 length sleeves worn with big costume jewellery and shiny, black stiletto-heeled shoes. I pictured Mom, lying in her open coffin, surrounded by red roses covering her feet (no need for the shoes).

If I really couldn't buy something I wanted, I would make it. Vogue patterns were always the best, but even they could be prohibitively expensive. 'Plus difficile' were the hardest, but the most satisfying to make. You couldn't beat a fresh pattern; slipping the flat, virgin sheets of tissue from the envelope and unfolding them. Cutting the pattern pieces out, being careful to cut along the printed black lines tattooed into the flimsy tea -coloured paper. The scissors cutting crisply through the layers of fabric made a satisfying whoosh sound.

When I began painting, and making abstract work, I used the dressmaking skills I'd acquired at school - cutting, pinning, pleating, and sometimes sewing my big canvases. Once, I even wore a painting, which had been rejected from a show - The Young Contemporaries - to the opening at Camden Art Centre. The painting was unstretched, on two layers of calico fabric, the top layer slashed through and scribbled over with hysterical graphite marks; it looked like a bizarre evening dress - (I was very young - still a student!)

Some time after this, following a break up with a violent boyfriend, I moved away from abstract, conceptual pieces for a while, and clothes began to feature in my work. In one series, I painted domestic objects onto long sheets of flimsy paper, which I gathered at one long edge, into 'skirts' or aprons. I rifled through my cutlery drawer and wardrobe for inspiration: an old-fashioned tin opener, painted gigantically, like a strange spear; a pair of fancy, awkward looking high-heels from a NYC thrift store. Pinned to the wall, the strange skirts danced across the surface, looking frivolous and menacing at the same time. I had some success with these works, and I exhibited over the following year alongside artists who are house-hold names now - in the Art world at any rate: Paula Rego, Alexis Hunter, Helen Chadwick, Annette Messager...

One day, towards the end of the 90's, bored and listless in my studio, I picked up a blue biro and began drawing on a sheet of lined A4 paper, a beautiful pair of lacey knickers I had bought in Marks & Spencer, to wear for a new boyfriend who was always breaking up with me. I wasn't to know it at the time, but this drawing was the genesis for a whole new series of works.

Reunited somehow with my boyfriend, he bought me an amazingly expensive 'set' of lingerie in red, from Rigby & Pellier. (Wearing the bra was akin to driving a Rolls Royce, when all you'd driven before was a Ford Escort). Soon after this, I had a studio visit from an old boyfriend - visiting from New York who ignored the big abstract painting I'd been working on, and focused his attention on the little blue drawing of the knickers, pinned carelessly to the wall. He offered to buy one - in red biro, for quite a lot of money, with a drawing of a bra to go with it (!) It seemed like a dubious and ridiculous amount of money, and I refused his offer (at first), but something struck a chord. After that, I really went to town with the knickers, buying the most ridiculous ones I could find at our local Primark in Hackney - always size 10, because they looked better for drawing when they were small.

In 2001, 14 of my drawings were included in a show called East International - selected by the feminist artist Mary Kelly (famous for her 1970's work Post Partum Document, where she exhibited, among other things, her child's baby vests and stained nappies).

During the exhibition, the gallery staff - recruited from the local Art school, wore white tee shirts, with one of my red biro drawings of a bra, printed across the front. One young man - tall and thin with short red hair and glasses, looked particularly fetching in his tee shirt.

Another biro series - a group of 12 underwear drawings - 4 black, 4 blue, 4 red (one of them drawn with a Dior lip pencil), were included in The Jerwood Drawing Prize later that year.

After that, people - friends, another boyfriend... started giving me knickers, from everywhere from Agent Provocateur to that cheap lingerie shop on the Holloway Road, and a whole new series ensued.